Gravity methods measure the acceleration of a gravitation field. A gravimeter (or gravity meter) is a passive, low-impact, non-invasive geophysical tool (OpenEI) that measures and maps lateral changes in the Earth's gravity field, which is a function of Earth material (e.g., rock type) density differences. Gravimeters can be deployed on the ground surface, from the air, in water, or via a borehole tool to collect data on density distribution in the subsurface (OpenEI). Because rock types have different densities, gravity data can be used to identify changes in stratigraphy. Stratigraphic information derived from gravity surveys can be used to develop the conceptual site model (CSM) for a contaminated site1. Technological advances in satellite altimetry, synthetic aperture radar interferometry, and digital terrain models have facilitated the use of rapid airborne and satellite-based gravity surveys.

Surface-based surveys collect gravity data using a gravimeter, which is a highly sensitive spring balance.2 In gravity surveys, the local acceleration of gravity is measured in units of Gal (after Galileo). One Gal is equal to an acceleration of 1 cm/s2. Most measurements of the difference between the Earth's normal gravity field and that observed at the ground surface are on the order of several milliGals (mGals) (Zohdy et al., 1974

Gravity survey measurements can be used to (OpenEI):

Understanding lithology and stratigraphy at a contaminated site is critical to identifying potential contaminant migration pathways. For example, gravimetry can identify buried faults and void spaces in rock or deposits of former river or stream channels that can serve as preferential pathways for dissolved contaminants (AAPG Wiki).

For water resource studies, such as artificial recharge to aquifers, the ability to measure aquifer thickness is important. Figure 1 is a time-lapse compilation of an artificial recharge study conducted by the U.S. Geological Survey of the Southern Avra Valley Storage and Recovery Project (SAVSARP) (USGS 2013).

The gravimetric geophysical method is based on two laws of physics: the Law of Universal Gravitation3 and Newton's Second Law of Motion4 (Zohdy, et al., 1974

). Any object with mass on the Earth's surface will be attracted to the Earth by a force, the object's weight. If the object is elevated a short distance above the Earth and allowed to drop, it will fall with gravitational acceleration. The acceleration is a function of both the mass of the Earth and the distance to the Earth's center (the shell theorem). This principle also applies to geologic bodies in the subsurface. Gravimeters on the ground surface measure the sum of the attractions of the underlying geologic body and the rest of the Earth. If the underlying geologic body is more dense than surrounding geology, it will produce a higher gravimeter reading; if it is less dense, it will produce a lower reading. 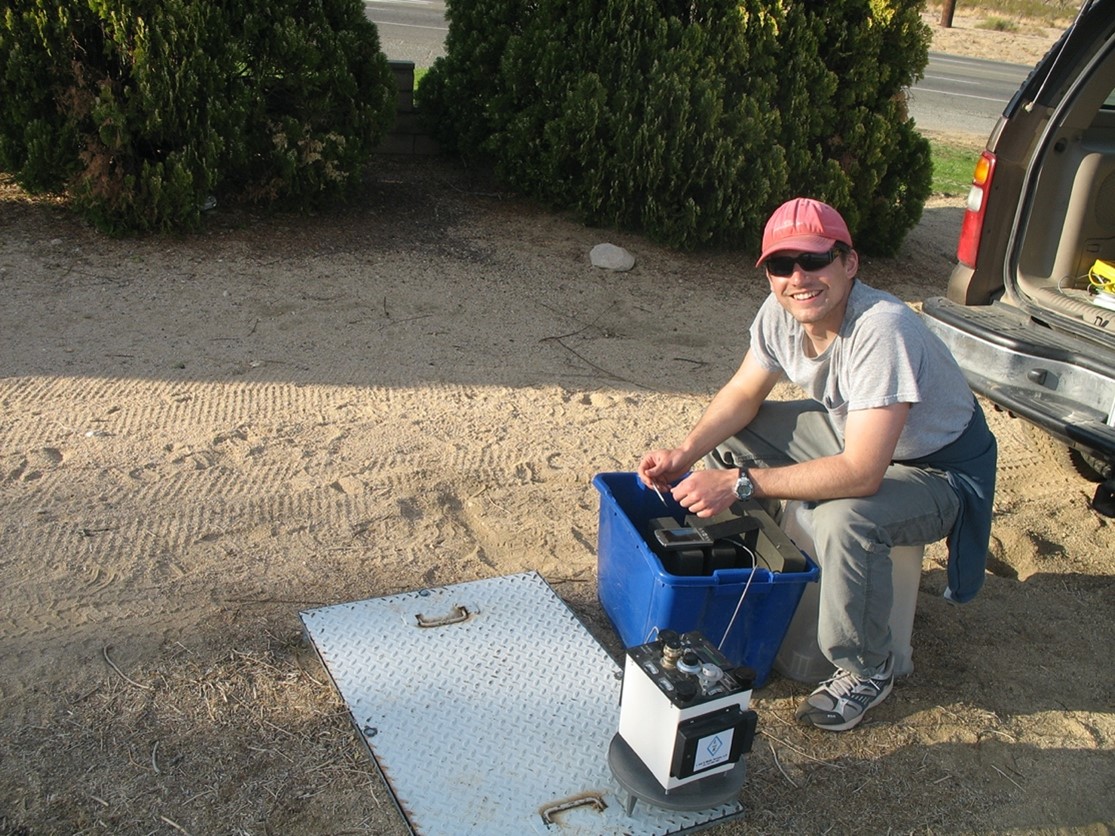 A gravimeter uses two categories of measurement: relative and absolute. The most commonly used instrument, the spring balance gravimeter (made with either metal or quartz springs [Nabighian, et al., 2005]), is a relative measurement device. It measures: 1) spatial differences in the gravity field between pairs of stations; or 2) temporal differences at a single point. The typical spring balance gravimeter consists of a small internal mass suspended from a spring. The mass is constant, but the weight changes at different points along the Earth, varying with the local acceleration due to gravity (Zohdy et al., 1974 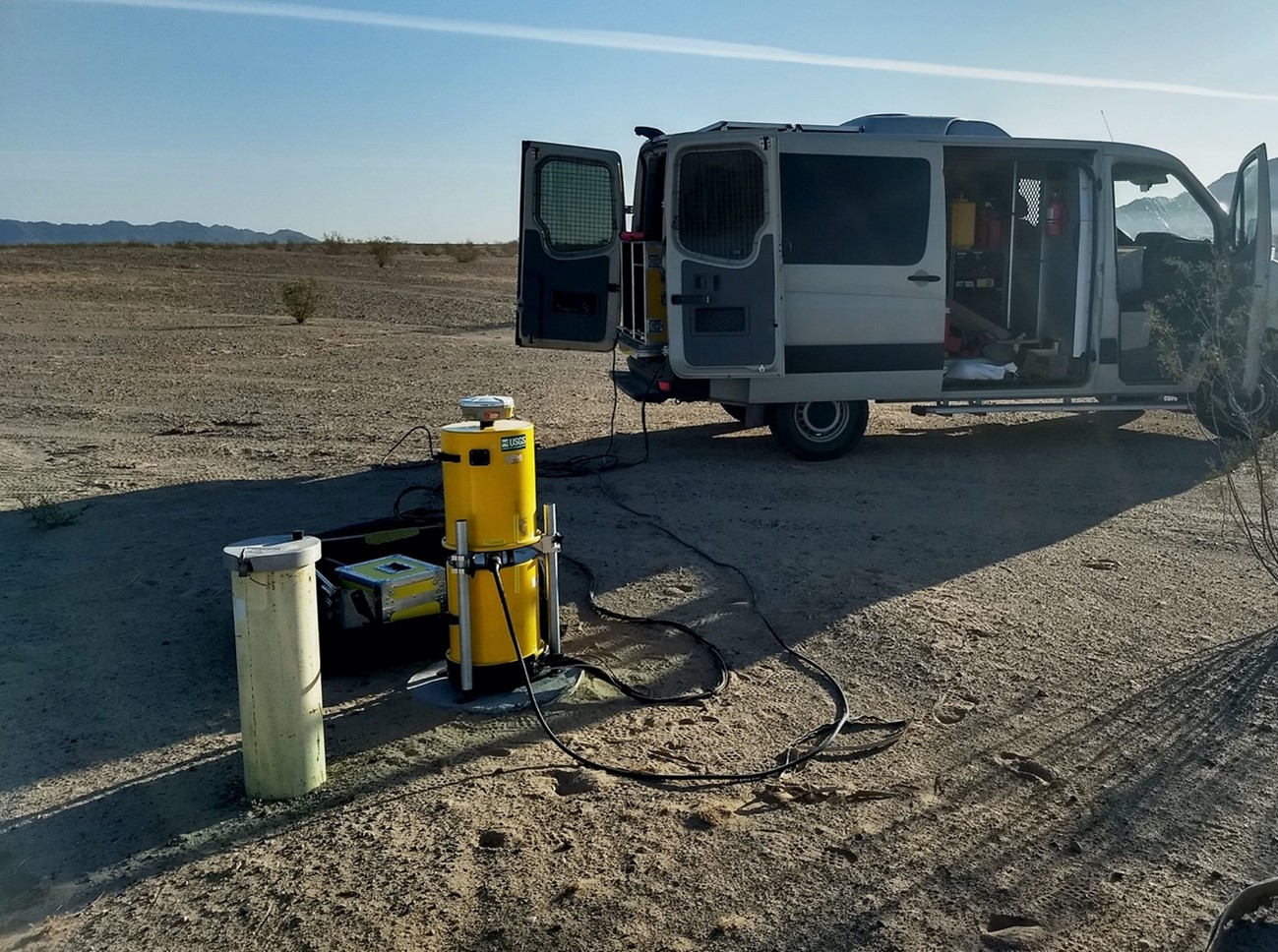 Figure 3. An example of an absolute gravity meter deployed to collect data during an aquifer storage study (U.S. Geological Survey, 2018).

Conversely, an absolute gravimeter measures the acceleration of a mass falling in a vacuum. It then calculates the absolute force of gravity at a single station over time (Carbone et al., 2020

), which is useful for evaluating changes in water storage over time, or direction of water flow. This meter is not moved from station to station as with the spring gravity meter. Figure 3 shows an example of an absolute gravity meter deployed to monitor changes in groundwater storage; a laser interferometer5 measures distance, and an atomic oscillator measures time.

Other system components, depending on the type of gravity meter used, may include cables to connect the unit to a laptop or tablet for interfacing with the unit, and a GPS to accurately locate the position and elevation of the station (Murray and Tracey, 2001

Gravity data can be collected on the ground surface, via airborne platforms (helicopter, airplane, satellite), or on waterborne platforms. Contaminated groundwater sites primarily rely on ground surface-based instruments using spring gravimeters or absolute meters as described above. A moving platform (for example a truck, helicopter, plane, ship, or satellite) gravity instrument is used to survey large or remote areas. When gravity data are collected using a moving platform, corrections must be made for the Coriolis acceleration based on the direction of the moving vehicle relative to the Earth's rotation, in addition to standard corrections.

Survey coverage will be site-specific, but depends on the station spacing, survey area conditions, and base station locations. Mapping of regional geologic structures uses widely spaced stations 30 to 300 meters apart, whereas microgravity measurements use more closely spaced measurements (e.g., 2 to 15 meters apart) to characterize localized geologic conditions (ASTM, 2020). Typically, data can be collected from 20-25 stations per day on a large-scale survey, and more for smaller-scale areas. A borehole gravimeter is sometimes used in oilfield applications to collect data on formation density as a function of depth. It is an uncommon tool for contaminated site investigations as the borehole must have a minimum diameter of at least 5½ inches (Nabighian et al., 2005).

As described in Murray and Tracey (2001), general rules for interpreting gravity data include:

Before gravity data are integrated and presented, the data undergo several steps:

Reduction/correction – There are several types of corrections that must be applied to the raw gravity data in order to determine real anomalies indicative of changes in lithology and other hydrogeologic features. Reduction of gravity data refers to the application of corrections that remove unwanted effects that distort the gravity field of the object surveyed. Most of these corrections are made automatically with GPS data or with user input into the inversion program.

Data interpretation – Interpretation techniques of gravity data are discussed in detail in Nabighian, et al. (2005) and include:

Geologic interpretation – Using data filtering techniques, portions of the gravity anomaly of interest are isolated. These target signatures are then used with other geologic information, such as established correlations between rock properties and gravity signatures, to create a model of the subsurface (Nabighian, et al., 2005). 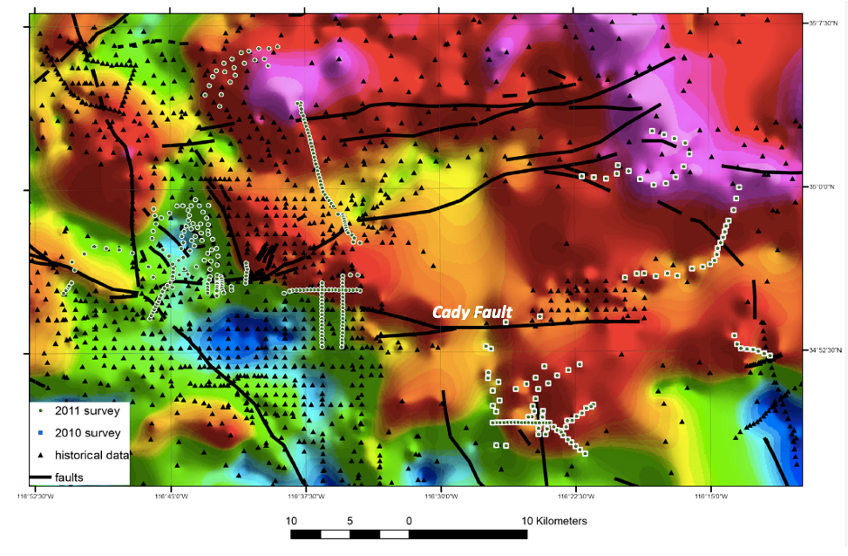 The display of the interpreted data may use 2- and 3-dimensional modeling software to incorporate other geologic information (e.g., seismic, magnetic, structural) into the visualization of the data. Geographic information systems (GIS) are used to aid in the integration of the data (Nabighian, et al., 2005). 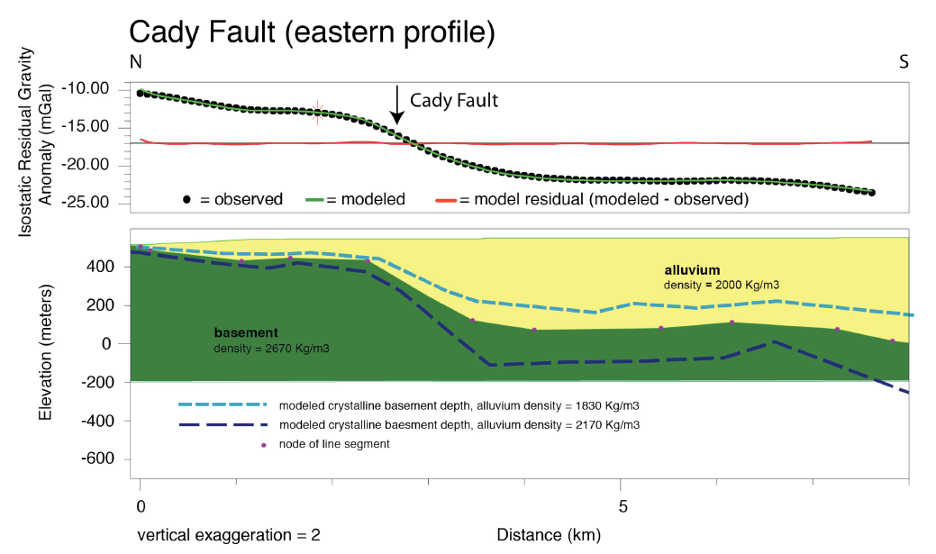 Gravity data can be used to refine the understanding of site geology and hydrogeology. For example, as described in Phelps, G., et al., (2013

), mapping of the Quaternary geology in the eastern Mohave Desert identified a series of Quaternary faults with strike directions suggesting structural complexity not indicated by existing tectonic models. Further mapping of the faults was complicated by lack of surface exposures, so gravimetry was used to trace the faults beneath the Quaternary sediments. Figure 4 shows the isostatic6 residual gravity surface interpolated from historical data and data collected in 2010 and 2011 in Barstow, California. Quaternary faults are shown in black. Figure 5 shows the modeled cross-section across the Cady Fault in Barstow. Using the two in concert helps to refine the understanding of the complex geology and structure of the subsurface (Phelps, G. et al., 2013

Precision and accuracy of gravity methods for subsurface characterization have improved over time and are based on the parameters described below. Resolution of gravity measurements is a complex function of the size and depth of the target features, positioning of stations, and density of the material surveyed; therefore, it is difficult to give specific ranges in a table. We used the information in ASTM D6430 (Gravity Method) to create a table, adding specific ranges where possible.

Gravity methods also have some limitations with respect to other geophysical methods (AAPG Wiki and New Jersey Department of Environmental Protection, 2005):

Rental costs for ground gravity surveys typically range from around a low end of $35 (USD) per station to approximately $300 (USD) per station. Factors affecting cost include the location of the survey, size of the survey, terrain, weather, and any permitting restrictions that may exist (OpenEI). Airborne gravity survey costs range from $86.89 (USD) per mile up to around $933.22 (USD) per mile (OpenEI). When centimeter elevation resolution is required, consideration should be given to using a real-time kinematic (RTK) survey. Costs for RTK survey equipment can range from $2K to $10K for a used system and $15K or more for new systems (BenchMark, 2022). Costs for traditional gravimeters range from $100K to $500K, although developments in field deployable systems show potential reductions in cost (Carbone, D., et al.,2020

The Use of Gravity Methods in the Internal Characterization of Landfills – A Case Study
Mantlik, F., et al.
Journal of Geophysics and Engineering. Vol 6. No 1. pp 357-364. 2009.

Gravity methods were applied to the internal characterization of a sealed landfill. The landfill was situated on low-density quaternary sand formations. Two north-south gravity profiles were completed. Gravity modeling of the data was supported with resistivity data.

In 2009, the U.S. Geological Survey evaluated the capabilities of several geophysical tools to delineate buried paleochannel aquifers in the glacial terrain of eastern Nebraska. Previous attempts at mapping the paleochannels using a helicopter electromagnetic survey had limited success in imaging the paleochannels due to the restricted depth of investigation by the clay-rich till overburden. This study evaluated other airborne and surface-based methods for the collection of geophysical data.

A gravity survey was conducted in the vicinity of Barstow, California. Data were processed, analyzed, and interpreted in the field to facilitate the decision on additional data collection for the remainder of the survey.

The research team used data from NASA's Gravity Recovery and Climate Experiment (GRACE) satellite mission to track changes in the mass of the Colorado River Basin, which are related to changes in water amount on and below the surface. Monthly measurements of the change in water mass from December 2004 to November 2013 revealed the basin lost nearly 53 million acre-feet (65 cubic kilometers) of freshwater, almost double the volume of the nation's largest reservoir, Nevada's Lake Mead. More than three-quarters of the total — about 41-million-acre feet (50 cubic kilometers) — was from groundwater.

The NEWTON-g Gravity Imager: Toward New Paradigms for Terrain Gravimetry

Principal Facts and an Approach to Collecting Gravity Data Using Near-Real-time Observations in the Vicinity of Barstow, California

University of Texas (Austin), 2004. Gravity Anomaly Maps and the Geoid

Use of Airborne, Surface and Borehole Geophysical Techniques at Contaminated Sites: A Reference Guide.