Self or Spontaneous Potential

Self or spontaneous potential (SP) logging is one of the oldest borehole geophysical methods, first developed in 1931 for application in the oil and gas industry (Schlumberger). When used as a borehole geophysical tool, SP logs record the naturally occurring potentials that develop at lithologic contacts. SP is often used to identify variations in lithology such as differentiating between shale or clay beds, relative sand and shale content, permeable beds, thickness of beds, and water quality. When used in conjunction with other logging methods such as gamma logging, SP logs can be used to correlate lithology and facies across a site (U.S. EPA, 1993).

SP can also be deployed as a surface geophysical tool. Data can be collected from probes deployed at the ground surface to evaluate a number of subsurface conditions, for example, to detect leaks from tailings dams and reservoir dams, trace subsurface flow patterns, monitor groundwater flow at landfill sites, detect leaks from membrane-lined sites, and monitor conductive contaminant plumes and remediation progress (U.S. EPA, 1993).

Quantitative interpretations for a dam embankment with possible seepage are determined from surface survey profiles across the crest. SP anomalies may indicate errant flow through the dam at some depth. The width of the half-amplitude provides a depth estimate. Outflow at the toe of an embankment or at shallow depths beneath the toe would produce positive, narrow anomalies.

Mining-influenced water can create the largest potential anomalies due to the redox reactions that occur between the sulfides and groundwater.

Typically, SP borehole logs are collected along with a suite of other geophysical logs such as resistivity and gamma logs to refine a conceptual site model. Inflections in a log can indicate boundaries between intervals with more clay or shale and intervals of more permeable sand. Correlating the more permeable sand units across a contaminated site helps identify zones where there may be migration of contaminated groundwater. Gamma logs, like SP logs, can be used to correlate lithology, locate bed boundaries, identify shales, and estimate shale content. SP logs can be used to calculate the conductivity of the formation water

if the formation is a thick clean sandstone and contains electrolytic solutes like sodium chloride (Keys, 1990; Collier, 1993 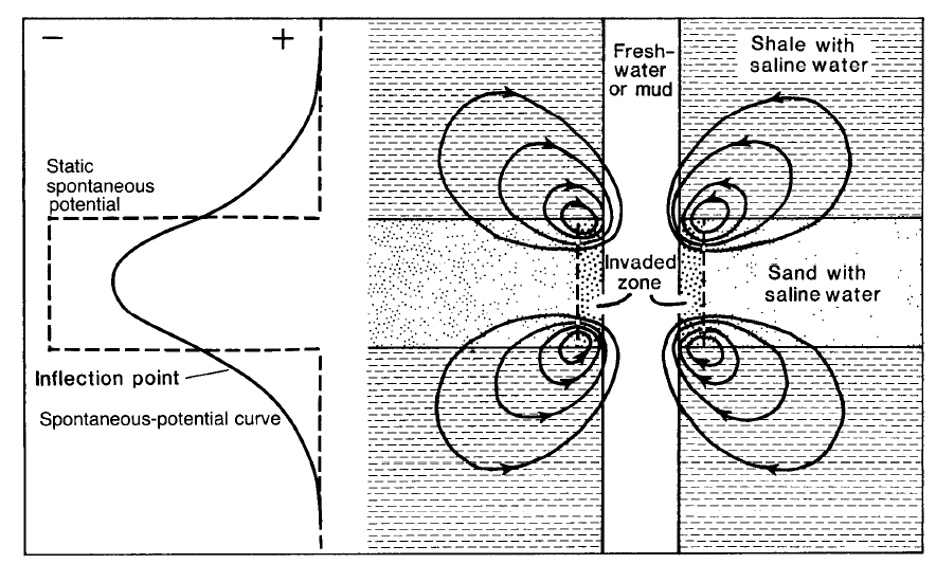 effects. The most significant contribution to SP is from electrochemical effects, which are subdivided into liquid junction1 and membrane potentials2. Figure 1 depicts both the liquid junction and membrane potential developed in a borehole. The left panel shows a typical SP log curve where the formation water is more saline than the borehole fluid. Negatively charged shale particles preferentially draw in cations from the formation water. The cations follow the concentration gradient to the borehole. The SP log shows a positive relative value at the shale, where the cation concentrations are enriched in the borehole. If instead, the borehole fluid is more saline than the formation water, the SP log will be more negative at the shale layer than the sandstone, because the shale will preferentially remove cations from the more concentrated borehole fluid (Keys, 1990). 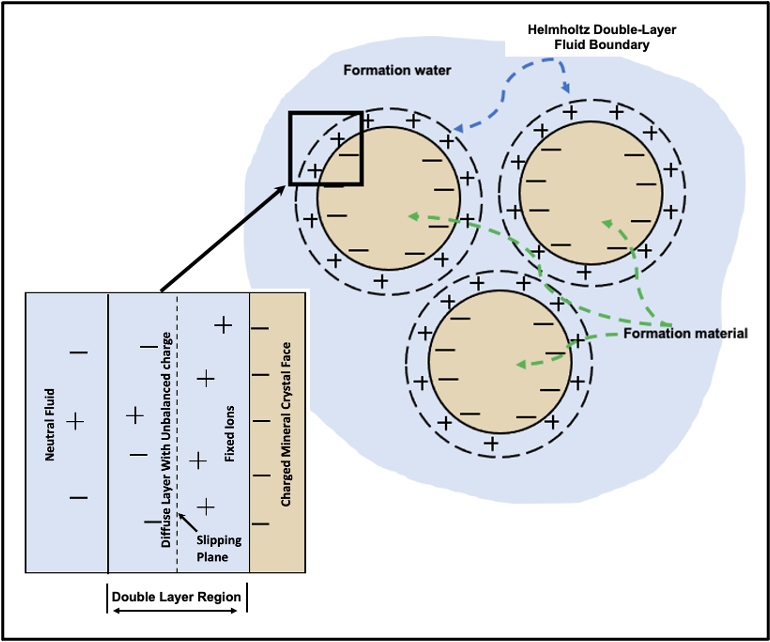 Electrokinetic potential, also called "streaming potential" or "electrofiltration potential," develops when ionic solutions flow through a non-metallic porous media (Figure 2). The moving fluid shears the electric double layer3 found along the pore walls of the solid material in the formation. This movement of anions (an electrical current) with respect to the positively charged fixed layer creates a potential. Electrokinetic potential usually contributes only millivolts to the SP signal. 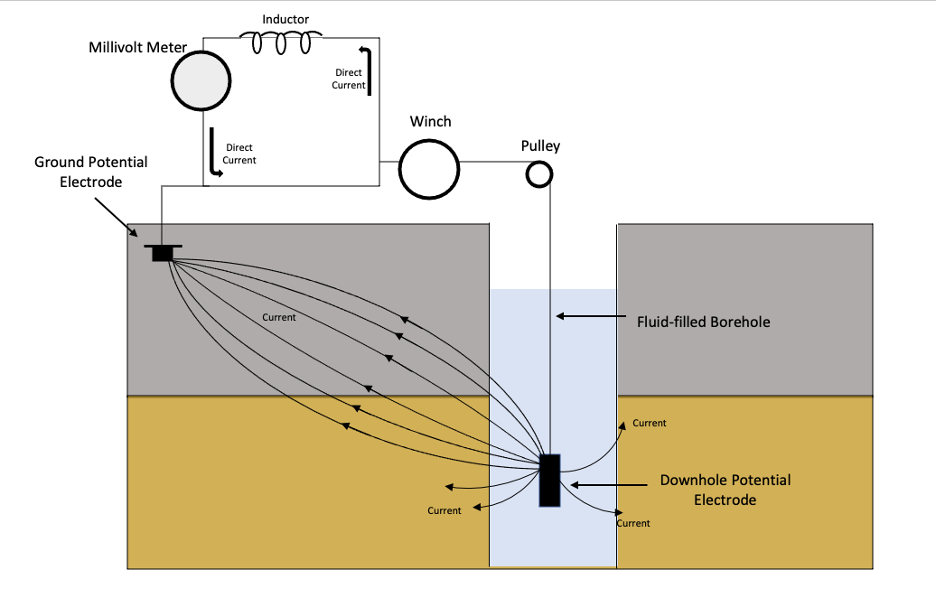 The equipment needed to collect SP data is simple. In the downhole application, a lead or stainless steel electrode is deployed via wireline down a borehole. It is connected to a grounded electrode at the land surface with a millivolt meter/recorder between the two electrodes. Figure 3 provides a schematic of the simplified system used to collect just SP data from a borehole (modified from Keys, 1990). More typically, SP data are now collected using a multi-sensor probe4 that also include sensors for gamma and single-point resistance (SPR) in addition to the electrode for SP5. This allows the generation of multiple types of logs simultaneously. For the surface application, the system consists of a primary base electrode along with a roving or mobile electrode. The metal electrodes are suspended in porous pots in a supersaturated solution of their own salts; for example, a copper electrode would be suspended in copper sulfate. The electrodes are connected by wire wrapped with abrasion-resistant insulation. A high-input impedance voltmeter is used to read the potential in millivolts (Wightman, W., et al., 2004).

The SP data can be collected via a borehole or at the ground surface. When collected from a borehole, the probe containing the electrode is lowered down the borehole to collect continuous measurements. When deployed as a surface geophysical tool, the electrodes are simply leap-frogged over each other along a transect or grid, or the data are relative to a reference electrode where all electrodes are non-polarizing (U.S. Army Corps of Engineers, 1995 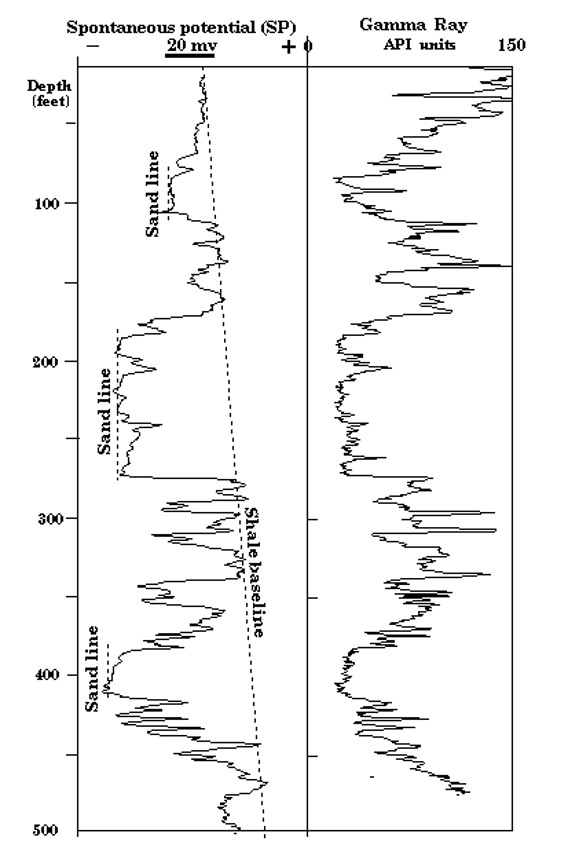 Figure 4. Although an SP and gamma log measure different physical properties, their sensitivity to shale is comparable (Kansas Geological Survey, 1996).

SP borehole logs are usually presented alongside other geophysical logs collected at the same time. The SP data are presented in plus or minus millivolts (mv) along the horizontal axis. The depth from land surface is plotted on the y-axis in feet. In the example shown in Figure 4, the SP data are presented along with gamma data. The gamma data are shown in API (American Petroleum Institute) units. In this example, the formation water has greater salinity than the borehole fluids. Deflections in the negative potential direction, in this case, indicate sandstone. A deflection in the positive potential direction indicates shale. If the salinity of the borehole fluid were greater than the formation water, the log would be reversed. The amplitude of the deflection is controlled by the difference in salinity between the borehole fluid and the formation water. When the salinity of the borehole fluid and the formation water are the same, the SP log would be a straight vertical line. The dotted line on the SP log is the shale baseline. The drift in the baseline in this log is due to the stronger sandstone differentiation at depth, where the increased salinity in the sandstone at depth in this location has caused a stronger response (Kansas Geological Survey, 1996).

The application of SP logging has some limitations:

). Thus, the use of SP logging where the borehole fluid and formation water have the same salinity is problematic.

This study presents a procedure to identify fractures contributing groundwater flow using SP measurements by electrokinetic processes. Measurements were collected when the borehole water head was lowered and then monitored while recovering. The electrokinetic model for flow through a tabular gap was used to interpret the measured data.

The main landfill in Rabat is situated above a shallow Mio-Pliocene aquifer consisting of sandy material. The landfill has likely discharged leachate, creating a contaminant plume, but its extent is unknown. This paper explores the use of SP measurements from the soil surface in conjunction with direct measurements of the water table and leachate from the landfill to distinguish between the electrokinetic and electrochemical components responsible for the range of potentials observed.

This study conducted SP, resistivity, and low frequency electromagnetic surveys and found good correlation between the geophysical investigations and the results of previously collected geochemical and hydrochemical measurements.

Geophysical studies were carried out in the Maheshwaram watershed in India, including logging in some of the borewells. In some cases, the results of surface SP and resistivity sounding have considerable correlation with geophysical logs. The thin fractures could be identified with resistivity and gamma logs. The surface SP studies show potential anomalies, indicating the presence and continuation of fractures.

Borehole Geophysical Techniques for Determining the Water Quality and Reservoir Parameters of Fresh and Saline Water Aquifers in Texas.

Erchul, R and D. Slifer, 1989. Geotechnical Applications of the Self Potential (SP) Method.