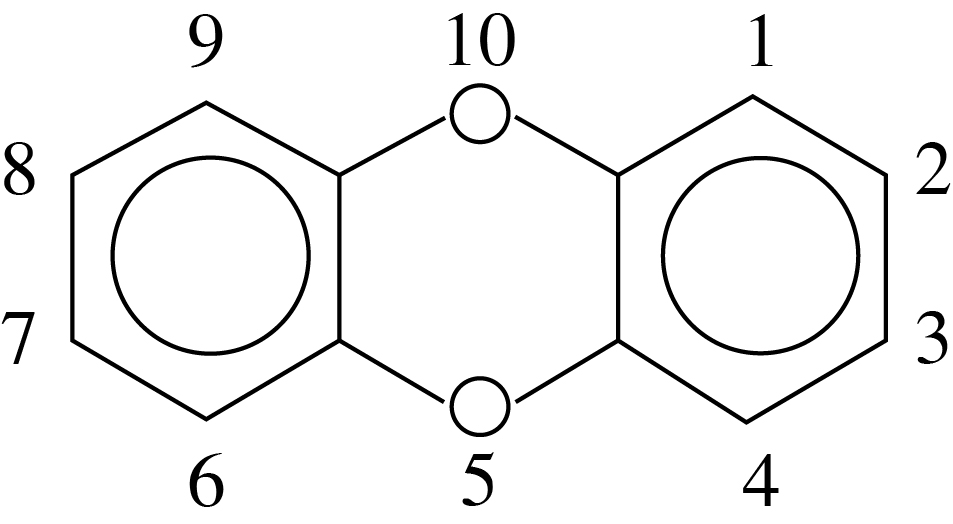 Although actions have been taken to reduce industrial emissions of PCDDs to the environment, an "environmental reservoir" of past releases remain. Thus, PCDD are considered persistent organic pollutants (POPs). PCDDs persist for a long time in the environment because their structure is resistant to chemical or biological degradation. They are subject to slow breakdown by sunlight (photolysis) and can be destroyed by hydroxyl radicals in the atmosphere. Because dioxins break down slowly, past emissions remain in the environment for years—even decades—before they diminish. The environmental reservoir of PCDDs stored in soil and sediment can contaminate food crops.

Dioxins are produced commercially for toxicological and chemical research only. Their occurrence in the environment is largely a result of the deposition of products of incomplete combustion as well as the unintended result of uncontrolled chemical reactions involving chlorine in manufacturing. Before they were banned, a major source of dioxins was the manufacture and application of phenoxy herbicides, which could contain 2,3,7,8-TCDD at a parts-per-million (ppm) level. These dioxin-containing herbicides were widely applied to plants and soil to control weeds on cropland, along fence rows, ditch banks, farm roadways, pastures, range land, rights-of-way, roadways, fire lanes, and railroads. Dioxin also are a byproduct in some current manufacturing of chlorinated organic compounds, including some non-banned herbicides, with the majority of the contamination found in oily residues at the bottom of process vessels. In one well-publicized instance, these "still bottom" oils were inadvertently used for dust control on dirt roads and parking lots. In eastern Missouri, 29 sites were identified as being contaminated with oil used for dust control. OctaPCDD can be produced during the manufacture of chlorophenols.

The manufacture of white paper using the kraft process, which commonly used elemental chlorine to bleach wood pulp, was once a major source of dioxins in wastewater discharged to surface water bodies. A switch to elemental chlorine-free and totally chlorine-free alternatives in the process along with stricter effluent guidelines reduced the amount of dioxin in sludges and effluents. However, the legacy contamination from past manufacturing can be significant in sediment.

The biggest contributor of dioxins to the environment is incomplete combustion. Dioxins are emitted to the air as byproduct of waste incineration; the burning of coal, oil, and wood (including natural sources, like forest fires); combustion engines, smoking, etc. Air emissions from combustion sources can result in widespread deposition of dioxins to the land and surface water. Hence, dioxins are found around the world at low levels in rural soils, as well as in sediments of otherwise pristine water bodies. Most of the dioxin deposits from wet and dry deposition ultimately become components of runoff that enter rivers, streams, and estuaries directly or through urban stormwater outfalls.

Information regarding levels of contaminants in specific geographic locations or water bodies may be available in a monitoring or characterization report. The U.S. Geological Survey Library catalog can be searched to locate reports for specific locales.

This paper investigates the thermal decomposition of technical endosulfan under oxidative conditions and the subsequent formation of polychlorinated dibenzo-p-dioxins, polychlorinated dibenzofurans (PCDD/F, dioxins), and their precursors. Both quantum chemical calculations and laboratory experiments were employed to investigate the pathways of oxidation of endosulfan.

A study by University of Michigan researchers attributes high levels of dioxin in a woman's blood to exposure to off-venting of a ceramics kiln.

The History of the US Department of Defense Programs for the Testing, Evaluation, and Storage of Tactical Herbicides
Young, A.L.
Office of the Under Secretary of Defense, 83 pp, 2006

The report provides information about levels of 29 specific dioxins, furans, and dioxin-related PCBs in the U.S. population based on serum samples tested from people who took part in CDC's National Health and Nutrition Examination Survey.

Provides results of analyses of various food products tested for dioxin like compounds in the years 2000-2004.

In October 2004, the EPA's draft dioxin reassessment was delivered to the National Academy of Sciences (NAS) for review. This document is a DRAFT FOR REVIEW PURPOSES ONLY and does not constitute U.S. EPA policy.

The Atmospheric Transport and Deposition of Dioxin to the Great Lakes for 1996 (revised 2001)
Mark Cohen
NOAA, Air Resources Laboratory

EPA's Dioxin Exposure Initiative was designed to fill critical data gaps regarding the sources of dioxin that contribute to human exposure. Illustrations on this website show that the cycling of dioxin through the environment is a complex process, involving multiple sources, flows, reservoirs, and sinks.