Figure 1. Animation illustrates a simple soil vapor intrusion pathway. Vapors rise from contaminated groundwater through the soil and enter the house via cracks in the foundation and the basement sump.

Vapor intrusion refers to the migration of chemical vapors from a subsurface source, such as contaminated soil, groundwater, or utility conduit, into an overlying building or structure. Vapor-forming chemicals that potentially can provide subsurface sources for vapor intrusion include chlorinated volatile organic compounds (VOCs), such as chlorinated solvents, petroleum hydrocarbons, pesticides, polychlorinated biphenyls, elemental mercury, and per- and polyfluoroalkyl substances (PFAS).

There are two mechanisms of vapor intrusion: soil vapor intrusion and conduit vapor intrusion. Soil vapor intrusion is the upward and lateral movement of vapors from a source of vapor-forming chemicals1, through the soil and into buildings via openings such as cracks in the foundation or gaps around utility penetrations (Figure 1). Conduit vapor intrusion (Figure 2 and 3) is the migration of vapor-forming chemicals within and from certain conduits2 directly into indoor air or where a contaminated conduit terminates at an indoor sump or within a utility closet (Kapuscinski, 2021). Vapors may enter the conduit outside the boundaries of a property. For example, a subsurface source of contaminants can enter a sewer system via damaged pipes offsite and migrate through the system and into buildings. The types of vapor intrusion are distinguished because effective mitigation approaches may differ. 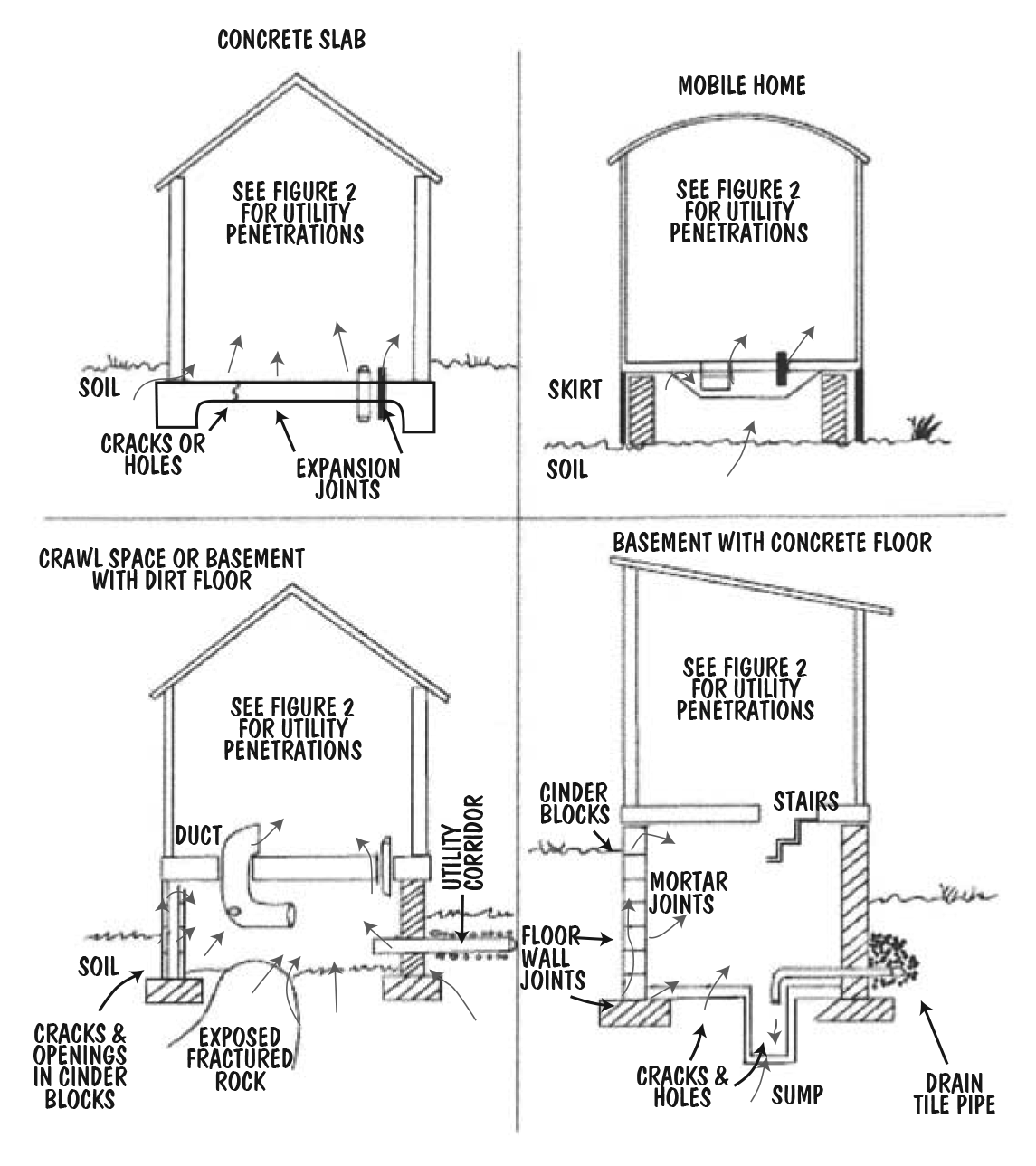 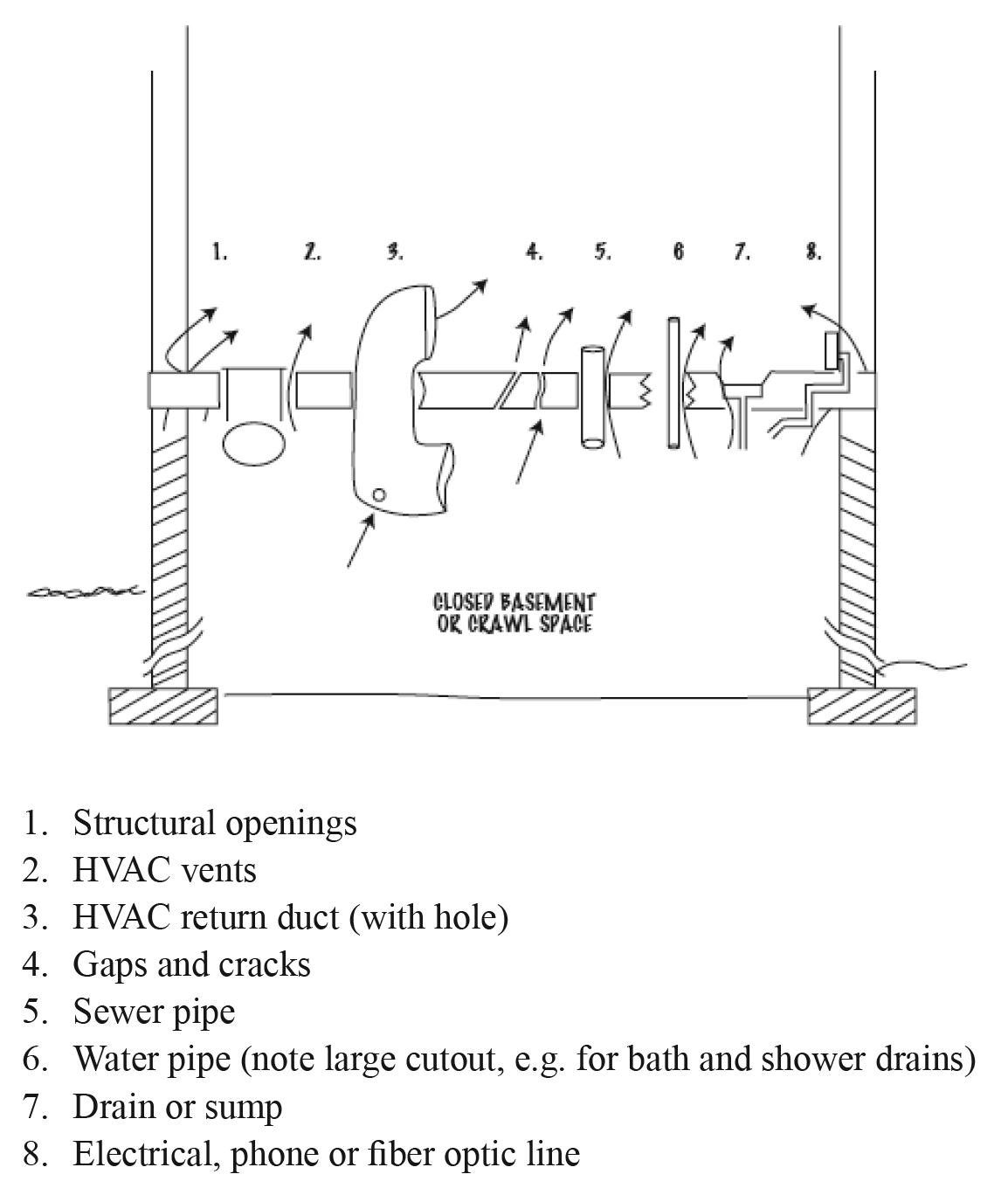 In some situations, vapors can accumulate in homes and other occupied buildings to levels that require evacuation of building occupants and other prompt response actions3 to reduce or eliminate exposure to vapors. For example, vapor intrusion may result in vapor levels that are high enough to pose a potential explosive hazard or to cause physiological effects (e.g., dizziness, nausea, or vomiting) among building occupants. In addition, basements prone to flooding from groundwater intrusion may also require prompt response actions if groundwater is contaminated with vapor-forming chemicals, particularly light non-aqueous phase liquids.4 Chemical odors may be indicative of situations that require prompt response actions.

More commonly, the concentrations of chemical vapors are not high enough to pose an explosive risk or health effects due to short-term exposure. However, the presence of lower concentrations of chemicals in indoor air may pose a risk of health effects due to long-term exposure. Thus, investigation of the vapor intrusion pathway and risk assessment are needed to develop a conceptual model and evaluate risk. In some situations, this can be complicated by the presence of some of the same chemicals in household or business products, such as solvents, paints, gasoline, dry-cleaned clothing, and cleaning agents. These products may pose, separately or in combination with vapor intrusion, a human health risk. To learn more about these products go to EPA's Volatile Organic Compounds' Impact on Indoor Air Quality Webpage.

Recognition of chemical vapor intrusion occurred starting in the 1980s with concerns over radon intrusion. Radon, a colorless, odorless gas, is formed from the decay of radium, a radioactive element that occurs naturally in bedrock and soil. It may also arise from uranium- or radium-bearing solid wastes in the subsurface that are proximate to a building. Prolonged exposure to radon can lead to lung cancer. For more information on health risks, as well as detecting and mitigating radon in homes and businesses, visit EPA's radon page.

The subsections of this issue area, Site Investigation Tools, Mitigation, and Community Engagement, discuss how vapor intrusion (primarily soil vapor intrusion) is incorporated into these facets of remediation site management. The subsection Guidance provides citations and links to guidance documents to assist remedial project managers (RPMs). References and resources for strategies and technologies discussed in the subsections are provided. Remember also to check EPA's Vapor Intrusion webpage for the latest updates to guidance and technical resources.