Borehole nuclear magnetic resonance (NMR) can be used to derive information about water content, mobile and immobile water fraction, porosity, permeability, and hydraulic conductivity of soil and bedrock (USGS; Behroozmand et al., 2014). This information can be used to refine the conceptual site model (CSM)1 for a contaminated site by identifying zones in the subsurface that can transmit or inhibit contaminant transport. The use of NMR to detect, characterize and/or monitor hydrocarbon contaminants in the subsurface is an area of active research (Dlugosch, R., et al., 2016). Several case studies focusing on this research have been included (Fay, E.L, et al., 2017; Konzuk, J., 2017; Slater, L.D., et al., 2020).

In the 1950s, scientists at the Schlumberger oilfield services company and several oil and gas producers worked on designs for NMR tools for oil and gas exploration (Kleinburg, 2001).By 1995, Schlumberger had developed an NMR logging tool that could be used in combination with other borehole measurement devices such as spontaneous potential (SP), resistivity, or gamma ray (Allen et al., 2001

).NMR logging tools have since become a widely used quantitative method in the petroleum industry due to their ability to detect oil and gas reservoirs previously overlooked by other conventional tools. The tool consists of a permanent magnet and an antenna that are lowered into a borehole to record the response of the nuclear magnetization associated with hydrogen nuclei in the pore fluids (e.g., groundwater or hydrocarbons) of the formation surrounding the borehole. 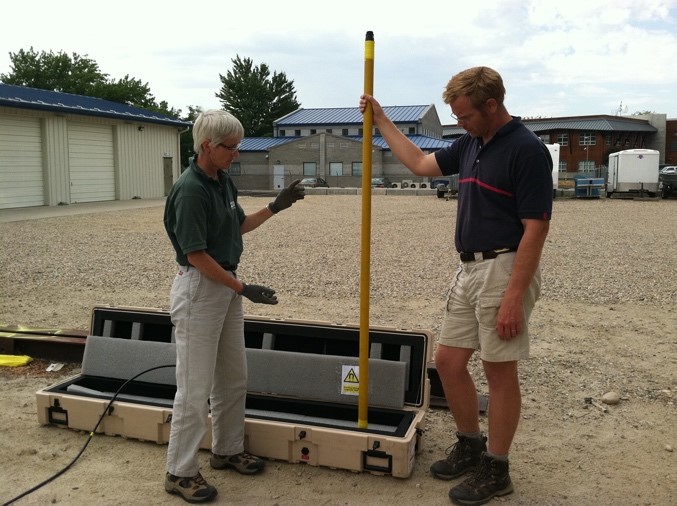 Recent advances in the use of NMR have resulted in the design of slimline NMR tools that fit into small, 2-inch diameter boreholes (open or cased with PVC) typically used in groundwater and environmental investigations (Walsh et al., 2013).The slimline NMR tool (Figure 1) is lighter and more portable than the tools used in the oil industry. It ranges in size from a one-person carry system to larger ones weighing 300-500 pounds. that require more than one person to set up and use.

While most geophysical methods provide indirect measurements of hydrogeologic properties, NMR is unique in that it provides a direct estimate of the formation water content and pore structure (Behroozmand et al., 2014).The NMR log provides vertical distribution of water content (porosity in the saturated zone) that can be correlated to hydrostratigraphic layers. Mobile and immobile water content can be estimated from the pore-size distribution; depending on the tool used, immobile water content can be further divided into capillary- and clay-bound water. NMR can also indirectly measure the growth of biofilm in subsurface pore fluids (Zhang, et al., 2021

Empirical relationships can be used to estimate the following properties (ITRC, 2019):

Understanding the heterogeneity of the subsurface and aquifer systems at groundwater sites is fundamental to developing a CSM that will support cleanup efforts at contaminated sites. NMR data from additional wells at a site can be correlated to identify preferential pathways for contaminant migration (e.g., more permeable layers within a formation).

The varying hydraulic conductivity of subsurface zones can be used to identify preferential flow pathways. This understanding of contaminant fate and transport informs the design of remedial systems. NMR can aid in placing well screens for water extraction wells by locating strata with higher hydraulic conductivity. The application of NMR to differentiate between water and hydrocarbons in the pore space based on the unique NMR signals from the different pore fluids is an area of active research (Coates, R.C, L. Xiao, and M. Prammer, 1999 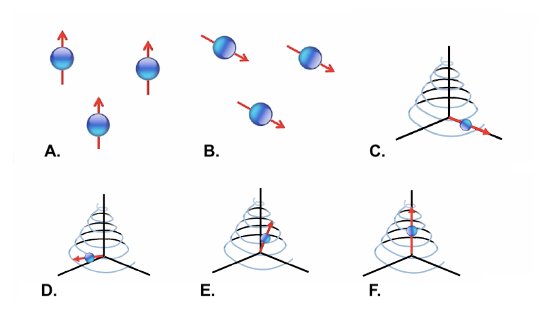 NMR measures the spin of hydrogen protons in water molecules. NMR instruments perturb the static magnetic field using a combination of permanent magnets and radio frequency induction coils (antennae). The permanent magnets on the tool create a static "background" magnetic field, which causes the hydrogen nuclei in the water of the formation to align with the magnet. An oscillating magnetic field is created by the antennae, which transmit precisely timed bursts, or pulses, of radio-frequency energy. The energy pushes the hydrogen nuclei out of alignment with the background applied, static field. The spins of the protons return to their original state during a relaxation phase. As protons "relax," they emit a signal that is measured by the NMR tool (Dlubac et al., 2013

). Figure 2 depicts the precession (or wobble of the rotational axis) of the hydrogen nuclei as they return to their original orientation. 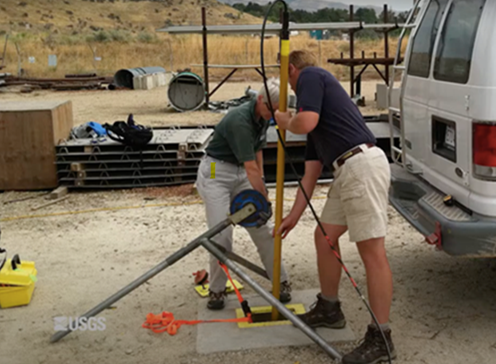 The borehole NMR tools typically used for groundwater investigations (Figure 3) consist of an NMR logging tool, tripod and pulley, cable spool and winch, laptop with inversion modeling software, a reference coil to detect background noise, and a power source. The NMR tool itself is composed of permanent magnets and radio frequency induction coils. 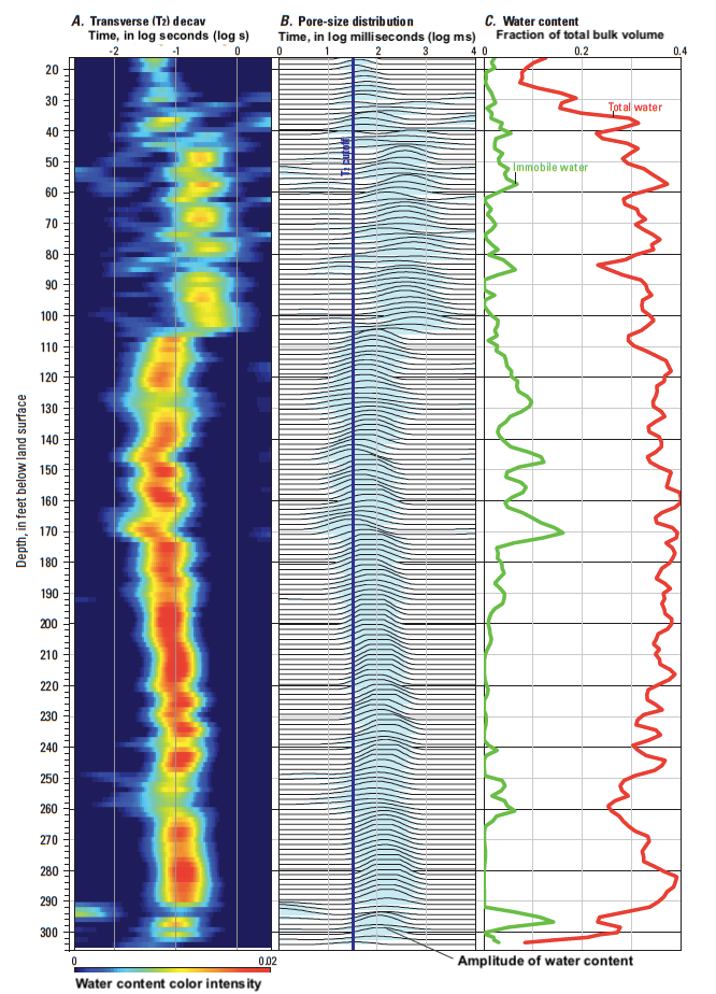 At groundwater sites, the borehole NMR tool is deployed in either open boreholes or boreholes cased with polyvinyl chloride (PVC) pipe. Because of the strong magnets in the tool, it cannot be used in boreholes cased with steel pipe. The boreholes can be fluid-filled or dry. The tool also can be combined with direct push methods. A casing is "pushed" to the target depth, and the tool is deployed through the casing and out the bottom to collect either discrete or continuous data (ITRC, 2019).

Borehole NMR tools generate plots of the T2 decay data, along with the pore -size distribution, total water content and fraction of immobile water, and hydraulic conductivity estimates. Capillary and clay-bound water may be determined by some tools based on the echo spacing (Te)2 of the tool. A T2 cutoff (typically 31-33 ms) is used to distinguish between mobile and immobile water content. Figure 4 shows a typical NMR plot.

The performance specifications for the NMR tool typically used at groundwater sites include tool diameter, radius of investigation, vertical resolution, and logging speed.

Advantages of NMR include: 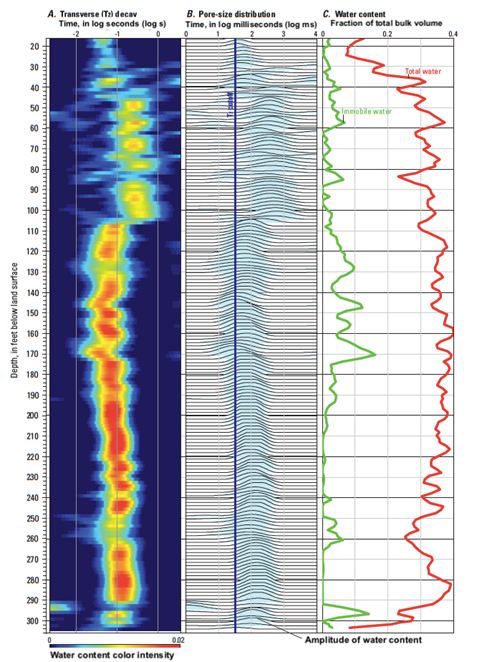 NMR tools typically cost around $55,000-$250,000 (USD) (ITRC, 2019). A general rule of thumb for rental rates is 20-25% of the tool cost monthly, and 6-10% of the tool cost weekly. The equipment can be rented from various vendors, or geophysical service providers can be hired to perform the logging.

Report summarizing research to determine the sensitivity of two emerging technologies, NMR and complex resistivity to pore-size distribution and permeability. The study evaluated the potential sensitivity of the two geophysical methods to contaminant mass isolated within the immobile porosity of fractured rock. The study also evaluated the predictive capabilities of the technologies in reference to quantifying immobile porosity and contaminant mass concentration.

Study details how NMR geophysics is being used by jurisdictions in Denver, Phoenix, and Tucson to characterize and manage their water resources.

NMR logging measurements were used to investigate an area of hydrocarbon contamination from leaking underground storage tanks (USTs) in South Dakota. Diffusion coefficient and relaxation time measurements were collected in two PVC-cased monitoring wells to detect a contaminant smear zone. The study revealed that NMR logging, under certain circumstances, can be used to detect and quantify in situ contamination, but sediment and contaminant properties at many sites may result in insufficient contrast of the diffusion coefficient and relaxation time.

The report evaluated the applicability of an NMR relaxation-based sensor to identify chemical parameters associated with the natural attenuation of chlorinated ethenes. The study sought to:

Report presents the results of a study to assess the potential for two different geophysical methods to augment tradition techniques in a hydrogeologic investigation in the Indian Wells Valley, California. Time-domain electromagnetics (TEM) and NMR were used in the pilot study to assess their ability to 1) delineate major coarse-grained and fine-grained geologic units, 2) identify the water table in areas without well control, and 3) identify the transition from brackish groundwater to fresh groundwater.

The study showed that a small diameter NMR logging tool could detect biofilm accumulation in the subsurface using changes in T2 relaxation behavior over time.

Paper provides the design approach taken to produce a small-diameter NMR tool for use in both open and PVC-cased boreholes and results of field testing the tool. Boreholes as small as 2 inches in diameter can be surveyed using the tool. Field results from application at several contaminated sites are included.

Behroozmand et al., 2015. A Review of the Principles and Applications of the NMR Technique for Near-Surface Characterization. Surveys in Geophysics. 36, 27-85.