Examples of Site-Specific Use

S/S has been implemented as part of the site remedy at over 300 Superfund sites as well as other cleanup sites across the country (EPA, 2000). This page lists resources on select sites where an S/S remedy has been implemented to give users site-specific examples of where S/S has been deemed appropriate and the results. The resources include project summaries and five-year reviews and are organized by the contaminants of concern found at the site. In addition, a case study of the St. Maries Creosote Superfund site in Idaho, provided below, illustrates why S/S was selected as the remedy, how it was implemented, and the results.

The five-year review reports for this Superfund NPL site describe the implementation of in situ mixing with a chemical reductant in 1999 to stabilize hexavalent chromium contamination and subsequent long-term monitoring.

After dredging activities to remove contaminated sediment in the Gowanus Canal are completed, portions of the contaminated native sediment will be treated using in situ S/S to prevent upward movement of the deep mobile coal tar. Following S/S treatment, the areas will be covered with a multi-layered cap. Less contaminated sediments dredged from a portion of the canal will be treated using ex situ S/S. The dredging, S/S, and capping will continue through mid-2023.

After the removal of surface soil, deeper soils impacted by coal tars, oils, and other organic and inorganic compounds resulting from MGP operations were treated in situ by mixing cement into the soils with a crane-mounted auger system. Soils were treated to a depth of 30 feet below ground surface Within the treated area, tar-like source material in the impacted soil was solidified in place. S/S changed the physical properties of the treated soil, creating an impervious mass to infiltrating precipitation and passing groundwater while further inhibiting leaching and transport of source material.

Past industrial operations at this former MGP site situated on the Hudson River contaminated the site with coal tar, purifier waste, and petroleum. Although the state had selected a remedy of large-scale excavation and in situ chemical oxidation, additional site characterization supported a revised remedy that maintains a substantial excavation component but also includes in situ solidification, which works with the site geology to provide long-term containment of MGP residuals on site.

The Cambridge Research Park in Cambridge, MA, is a former brownfield site. To reclaim it, cement was mixed into 103,500 cubic yards of NAPL-impacted soils using a specialty auger system in a shallow in situ soil mixing technique. As the auger penetrated the soil, cement grout was pumped through the mixing shaft, exiting through jets located on the auger flighting and mixing cement into the contaminated soil. An overlapping drilling (auger) pattern was used to ensure complete mixing and treatment of the area. Cement-based S/S successfully treated the soil for MGP contaminants and improved the physical properties of the soil for property redevelopment.

The five-year review reports for this site describe the remediation of the site's Operable Unit J, completed as required by the ROD: ~10,000 cubic yards of coal tar and tar-contaminated soil were solidified in place. A 7-ft engineered cap designed to reject 90% of precipitation was placed over the unit. On-site borrow was used for all layers but topsoil.

The five-year review reports describe the excavation of 45,000 cubic yards of soil contaminated with creosote, PCP, and dioxins from the former process area and treated ex-situ using S/S (cement, carbon, and fly ash). Following S/S treatment, the material was buried in a 7-acre area and covered with a 24-inch soil cap.

The five-year review reports for this site describe the excavation of 13,199 tons of NAPL-impacted material remedied with S/S using a mixture of 11% Portland cement and 1% bentonite mix.

At a former wood treating facility in Port Newark, NJ, 8 acres of soil contaminated with PAHs resulting from the use of creosote, arsenic, and chromium were remediated with S/S. Two types of mixing techniques were used to treat the contaminated soils. In situ soil mixing was used on 22,000 cu yds of soil from 2 ft to 12 ft. Treatment involved pre-excavation of contaminated material, placement of the stockpiled material back into the excavated area in lifts, and S/S treatment of each lift with an in situ blender head. Another 26,000 cu yds of contaminated soil were addressed ex situ, using a pugmill to mix Portland cement into the soil. The pugmill mixture was placed on top of the in situ treated soils in a 2-ft layer, which was compacted to have structural properties similar to those of soil-cement, achieving unconfined compressive strengths greater than 250 psi and providing an excellent base for pavement placed over the entire site.

Describes the use of cement-based S/S to treat arsenic- and creosote-impacted soil at the site of a former wood-treating facility in Port Newark, NJ. The treated soil was re-used as base for new pavement at the Brownfields site.

Phosphate-based binders marketed by four vendors were evaluated at Camp Withycombe, OR, for immobilization performance of Pb in small arms firing range soil. Variability in Pb stability was observed in all four soil treatments.

Lead-contaminated soil at a small arms range was treated with a liquid reagent using both in situ and ex situ S/S techniques.

Part of the selected CERCLA remedy for the 300 Area is uranium (U) immobilization or stabilization using polyphosphate solutions to sequester U and reduce its mobility in the vadose zone, the periodically rewetted zone (PRZ), and the top of the aquifer. The remedy is being implemented in a 3-acre area of high residual U contamination in two sequential stages. During implementation of Stage A (November 6-18, 2015) within an area of ~0.75 acres, polyphosphate solutions were applied to the vadose zone using a near-surface drip infiltration system, to the PRZ using subsurface injection, and to the top of the aquifer using deeper subsurface injection. Data collected during and following treatment indicate successful delivery of high phosphate concentrations to the PRZ and to the top of the aquifer using injection wells. This report also identifies refinements needed for implementation of Stage B treatment, which will be performed in an adjacent area of 2.25 acres.

For this Superfund NPL site, the five-year reports describe the excavation of an estimated 13,600 tons of sludge and soil from a lagoon, followed by S/S application, where the material was combined on site with a solidifying ash/mortar mixture containing phosphate, sulfide, and magnesium oxide reagents. The mixture was encapsulated in a high-density polyethylene geomembrane-lined containment cell where it solidified. ROD-specified contaminants of concern for soil were arsenic, beryllium, cadmium, chromium, cyanide, lead, manganese, and nickel.

The five-year review reports for this Superfund NPL site describe the in situ S/S of ponds (dewatered prior to S/S remedy) for metals and organics followed by capping.

Ex situ S/S using cement and pug mill for mixing lead, antimony, and arsenic contaminated soils is described in the five-year reports for this Superfund NPL site. Approximately 61,985 tons of soil/sediment were treated and placed into an onsite containment cell that was subsequently capped with a geosynthetic clay liner.

From 1939 to 1960, a wood pole preserving company in St. Maries, Idaho, treated poles with creosote, which contaminated upland soil, groundwater, riverbank soil, and sediments within the adjacent St. Joe River with creosote (Figure 1).

In 1998, nearby property owners reported an oily sheen on the river and riverbank. This prompted the removal of 195 tons of impacted debris and creosote-contaminated soil from the riverbank to reduce discharge of creosote to the river. Although not added to the National Priorities List, investigations and cleanup were conducted in accordance with CERCLA. The remedial investigation and feasibility study determined that soil, sediment, and groundwater remained contaminated with creosote and other chemicals of concern1 and posed unacceptable risk to human health and the environment, particularly benthic organisms and bottom-dwelling fish.

Remedy components, approved in the 2007 record of decision (ROD) and later modified in the 2014 Explanation of Significant Differences, included:

In situ solidification allowed deep contaminated soil below the water table to be left in place. Remedial action objectives are met by immobilization of contaminants and slurry wall containment. The objectives were to prevent further leaching of contaminants into surrounding soil, groundwater, and the St. Joe River and to prevent exposure to contaminants (human dermal contact and ingestion as well as direct contact by benthic and aquatic organisms). 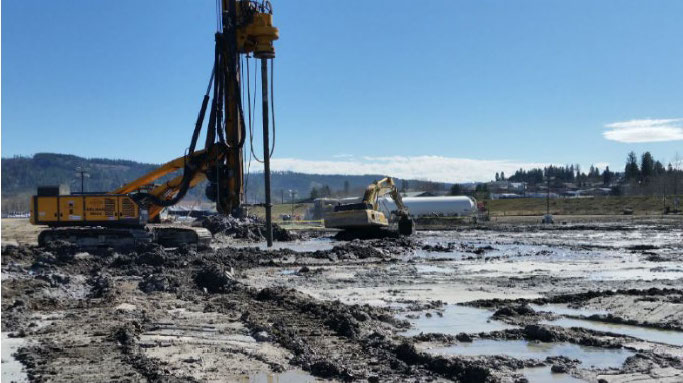 Figure 2: A crane equipped with a large-diameter auger injected and mixed the binder with contaminated soil and groundwater.

In April 2015, construction of the subsurface slurry wall was completed. The upper 10 feet of soil within the walled area was excavated for treatment in an onsite thermal desorption unit. The binder (a mixture of 12% blast furnace slag and 6% Portland cement on a dry soil weight basis) was injected via a large-diameter auger to solidify soil from 10 to 60 feet below ground surface. Thorough mixing was accomplished by moving the auger through the soil column as the binder was injected. The auger was advanced in overlapping columns (Figure 2). In addition, an excavator bucket was used to mix the reagents and soil in specific areas.

During the in situ solidification process, samples of the treated material were collected to measure unconfined compressive strength (psi) and hydraulic conductivity and ensure performance specifications were met. The target strength (minimum 30 psi) was not always achieved within 28 days of curing, so the curing time was extended and remixing occurred, as needed. A total of 37,457 cubic yards of soil was treated. The top of the solidified monolith was graded and covered with fill to drain water away. 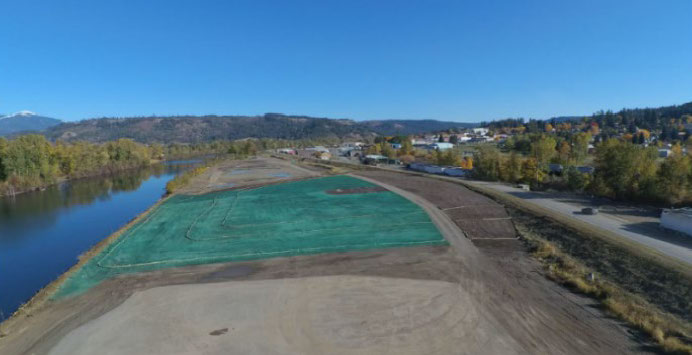 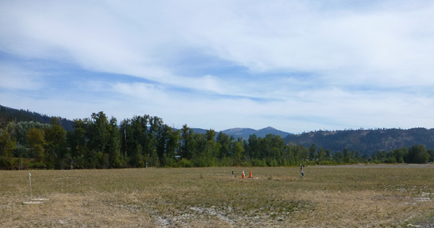 Following completion of site restoration activities in April 2018, the treated S/S area has been visually inspected regularly to monitor for signs of damage to the soil cover from surface water erosion, wind erosion, flooding, and burrowing as part of a long-term monitoring program (Figures 3 and 4).

To protect the integrity of the in situ solidification remedy and meet ROD requirements, an environmental covenant includes limitations on land use. The City of St. Maries now owns the property and, as of 2021, plans to reuse the site in a manner that will comply with land use restrictions in the covenant.

Case study was adapted from information contained in: