Scientists began identifying widespread perchlorate contamination in the United States following the development of an analytical method in 1997, which lowered quantitation levels from parts per hundreds to 4 µg/L (micrograms per liter) (California EPA, 2015; ITRC, 2005). Drinking water samples collected in the states as part of perchlorate's 1999 listing on the Unregulated Contaminant Monitoring Rule showed that 1.9% of the 34,728 water supplies sampled contained perchlorate at concentrations ranging from 4 to 420 µg/L (Brandhuber, et al., 2009). As of 2009, detection of perchlorate in soil, surface water, and/or drinking water wells had been reported in 45 states, the District of Columbia, and three territories (GAO, 2010).

Environmental contamination has been frequently associated with rocket manufacturers or military facilities. One of the largest identified releases occurred at a former rocket fuel production facility in Henderson, Nevada, that exploded in 1988. The resulting release contaminated the groundwater, which flows into the Las Vegas Wash, located near Lake Mead, and the Colorado River, which both serve as public water supplies (EPA, 2020). 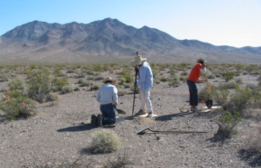 Figure 1. USGS scientists collect soil, plant, and other samples to determine how natural perchlorate from the atmosphere occurs in soil (Source: USGS, 2014).

To a limited extent, perchlorate also occurs naturally. For example, caliche1 deposits in northern Chile contain about 0.1% perchlorate (Erickson, B., 2004). The caliche is a source of naturally occurring sodium nitrate, which is used as a nitrogen source in fertilizer (Urbansky, et al., 2001). As a result, perchlorate has been detected in fertilizers derived from the Chilean caliche (Collette, et al., 2003). Perchlorate also forms naturally in the atmosphere. As it is flushed out of the atmosphere by rain or from dry deposition of airborne particles, perchlorate can be deposited in soil and surface water (Dasgupta, et al., 2005; USGS, 2014). Thousands of years of atmospheric deposition and concentration through evaporation have resulted in soils with salt-rich zones containing perchlorate in the Southwestern U.S. (Rao, B., et al., 2007).

A survey of drinking water wells in western Texas showed perchlorate to be present in more than 80% of the wells tested over 60,000 square miles. Most of the levels of perchlorate found were quite low, but ~25% were equal to or greater than 4 µg/L. Researchers at Texas Tech University concluded that the source of perchlorate was likely atmospheric deposition or surface oxidation, and not anthropogenic in nature (e.g., rocket fuel, flares, fireworks, explosives, and Chilean fertilizer) (Erickson, 2004; Jackson, 2004).

Perchlorate is known to accumulate in some plants, especially leafy green vegetables and tobacco plants, as a result of plant uptake from soil, fertilizer, or irrigation water containing perchlorate (ATSDR, 2008; Huber, et al., 2010). Studies have shown that perchlorate is present in a range of food products and human and dairy milk (Kirk, et al., 2003). Levels can vary widely within a single food based on where it is grown and the amount of perchlorate in the water (U.S. Food and Drug Association [FDA], 2017). Other studies found that perchlorate concentrations in drinking water are not correlated with perchlorate concentrations in breast milk (Kirk, et al., 2013). As part of its Total Diet Study, the FDA found that 74% of samples of 285 foods contained detectable levels of perchlorate (Murray, et al., 2008).

"Perchlorate: Occurrence is Widespread but at Varying Levels; Federal Agencies Have Taken Some Actions to Respond to and Lessen Releases." GAO-10-769.