Treatment of perchlorate in soil and water is complicated by its physical and chemical properties. The perchlorate anion is soluble and very mobile in aqueous systems and can persist in the environment for many decades under typical groundwater and surface water conditions because it does not react readily with other available constituents. While perchlorate is a strong oxidizing agent, its reduction is generally very slow, rendering common reductants ineffective (Roote, 2001). The four oxygen atoms in the perchlorate tetrahedron surround the central chlorine atom, blocking reductants from directly attacking the chlorine (Roote, 2001). 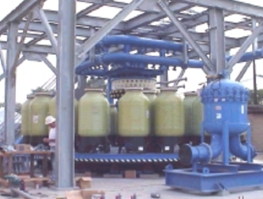 The success of a perchlorate treatment technology depends on several factors, including its concentration and the presence and concentrations of co-contaminants, water quality parameters (e.g., pH, alkalinity, natural organic matter, total dissolved solids, and metals), and geochemistry (e.g., nitrate, sulfate, chloride, dissolved oxygen, and redox potential). For in situ treatment of perchlorate, variables related to the site's hydrogeological setting (e.g., depth to and distribution of contaminants, soil permeability, and groundwater flow velocity) should be considered (Roote, 2001).

ITRC guidance Remediation Technologies for Perchlorate Contamination in Water and Soil (ITRC, 2008) summarizes several commercially-available and emerging remediation technologies for treatment of perchlorate in soil and groundwater. Since development of the ITRC guidance document, many of the recommended technologies remain the same; however, some advancements have been made. For more information on perchlorate treatment technologies, the Department of Defense (DoD's) environmental research programs fund research to address different aspects of perchlorate contamination including remediation, source identification, and measuring perchlorate in the environment.

Physical Technologies in Soil: Physical techniques to treat perchlorate-contaminated soil include ex situ thermal treatment and soil washing, which are summarized in the following table.

Shallow soil can typically be treated ex situ, which can provide better control and mixing of nutrients and carbon sources than in situ bioremediation. The contaminated soil is excavated and treated above-ground for subsequent backfilling or offsite landfill disposal. Bioreactor vessels designed to produce an effective environment for microbial degradation, can be used for ex situ biological treatment of perchlorate-contaminated water, such as that produced from treating soil via soil washing (Nair et al., 2020).

Bench-scale tests have demonstrated the potential effectiveness of phytoremediation and constructed wetlands to treat perchlorate contamination of soils and groundwater; however the presence of nitrate may add to the length of time needed to remediate perchlorate due to the inhibition of nitrate as an electron acceptor (ITRC, 2008).

Air Force Center for Engineering and the Environment (AFCEE), 2002.

Feasibility of Natural Attenuation for the Remediation of Soil Contaminants at the Santa Susana Field Laboratory. Department of Civil and Environmental Engineering California Polytechnic State University for DoE, 149 pp.

This document reviews technologies applicable to the remediation of perchlorate in water and soil to provide industry, responsible parties, and state and federal environmental regulators with reliable guidance to help streamline the review and approval process for selecting and implementing perchlorate treatment technologies.

This literature review provides an assessment of the development status of various biological, physical, chemical, and thermal treatment technologies used for the removal of perchlorate from groundwater.

This book summarizes the current knowledge and understanding of the extent and potential sources of perchlorate contamination, its behavior, exposure pathways in the environment, toxicology and risk assessment, and treatment technologies for removing perchlorate.

This article discusses the environmental occurrence and health effects of perchlorate contamination and describes a variety of technologies that are emerging for the treatment of contaminated soil and groundwater. [This link to the article has been provided with the permission of the American Chemical Society.]

Issues in Managing the Risks Associated with Perchlorate in Drinking Water

Groundwater treatment system operation is based at a 9,000 square foot building located within a 1.77-acre site in Henderson. The treatment system comprises 14 extraction wells, a water handling and fluidized bed reactor (FBR) treatment plant, and a discharge system.

In a separate chapter for each listed contaminant, Volume 2 of 3 describes (1) the natural immobilization or degradation processes that can result in the attenuation of the contaminant and (2) data requirements to be met during site characterization. The document emphasizes characterization of immobilization and/or degradation processes that may control contaminant attenuation, as well as technical approaches to assess performance characteristics of the MNA remedy.

The efficacy of a 2-stage, fixed-bed biological treatment (FXB) system to address perchlorate-contaminated groundwater was evaluated at a facility in Rialto, Calif., alongside a fluidized bed bioreactor to enable comparison of the performance of the two biological treatment systems.

The project successfully demonstrated the feasibility of a membrane biofilm reactor (MBfR) to destroy perchlorate and nitrate in groundwater via anoxic autotrophic biodegradation and produce potable water at the pilot scale. Final Report Addendum

During the demonstration of active enhanced in situ bioremediation at the inactive Rancho Cordova test site in California, groundwater containing perchlorate and TCE was extracted from the shallow aquifer, amended with ethanol, and recharged to the shallow aquifer.

The project goal was to demonstrate the efficacy of semi-passive enhanced in situ bioremediation (EISB) of perchlorate in groundwater at a scale large enough to generate accurate full-scale design and cost information for widespread technology consideration and application.

An overview of the current state of understanding of perchlorate remediation is followed by a discussion of basic principles of microbial and abiotic processes and the engineering and implementation issues underlying the technologies described.

A field demonstration was conducted to evaluate the in situ biological reduction of perchlorate and co-contaminant TCE using a horizontal flow treatment well (HFTW) system to mix electron donor into perchlorate-contaminated groundwater by recirculating the groundwater. ESTCP Cost and Performance Report

In 2007, a 10-month demonstration study was initiated in Rialto, CA, that used two first-stage, parallel fixed-bed (FXB) bioreactors to remove perchlorate from groundwater. Effluent from these reactors was dosed with hydrogen peroxide to reoxygenate and oxidize residual organics and hydrogen sulfide, and then passed through a biofilter to oxidize any remaining organics and sulfide and to remove turbidity. ESTCP Cost and Performance Report

This report provides information regarding the in situ remediation of perchlorate-contaminated groundwater. The case studies are designed to serve as examples of successful in situ bioremediation projects that were designed differently and located at separate sites.

A technology model has been developed that combines the HFTW-induced aeration and volatilization effects of ground-water recirculation with in situ biodegradation processes that result from using the HFTWs to mix electron donor into perchlorate-contaminated ground water.

This ITRC Technical Guidance describes a systematic approach for evaluating the feasibility and effectiveness of in situ bioremediation in groundwater. A section of this document is devoted to perchlorate and the remediation of perchlorate contaminated groundwater.

This report describes a research project conducted by the Air Force Institute of Technology to investigate how a horizontal flow treatment well system can be used to treat perchlorate-contaminated groundwater.

This report describes the second phase of the perchlorate treatability study conducted at the Aerojet facility in Rancho Cordova, California. The objectives of the Phase 2 Treatability Study were to 1) demonstrate that the technology identified in the Phase 1 Study could effectively and reliably produce potable water, 2) confirm the treatment efficiency of each unit process in the treatment train, and 3) collect data to develop design criteria for a full-scale treatment facility. (Also see: Phase 1 Treatability Study Report – Perchlorate in Groundwater

and Review of Phase 2 Treatability Study

This report describes treatability studies conducted to identify suitable carbon sources for treating perchlorate-contaminated soils at the Longhorn Army Ammunition Plant. A series of bench-scale experiments were also conducted to measure the kinetics of perchlorate removal in the soil.

This report summarizes the cost and performance of a perchlorate biodegradation demonstration project conducted at Tyndall AFB and Thiokol Corporation's production plant in Brigham City, Utah.

This report describes research conducted to optimize a biological perchlorate treatment process that was previously tested at Tyndall AFB.

and Review of Phase 2 Treatability Study

This article discusses the characteristics of mixed cultures and isolates of microorganisms and their potential for treating wastewater and drinking water. [This article is posted here with the permission of CRC Press LLC.]

This report describes a demonstration project that was conducted to provide a production-scale, operational validation of a perchlorate treatment process developed by the Air Force Research Laboratory.

This report describes a methanol-fed biological reactor that is being used at a Department of Defense facility to treat perchlorate-contaminated groundwater.

The WBA IX process comprises three unit operations: pretreatment (pH and alkalinity reduction), ion exchange with two packed-bed vessels configured in series (multi-barrier perchlorate removal), and post-treatment (restoration of pH and alkalinity). The demonstration system was integrated with Rialto No. 3 as a pre-treatment to the existing single-use ion exchange system.

An ion exchange (IX) process for perchlorate treatment in drinking water, regeneration of spent IX resin for re-use, and destruction of perchlorate in the spent regeneration fluid to create an integrated IX regeneration process was demonstrated was at an operating municipal water treatment plant, Fontana Water Company, in Fontana, CA. ESTCP Cost and Performance Report

Priostar® Dendrigraft Polymer, a scalable dendritic polymer-based filtration material, has a high capacity for the selective extraction of perchlorate ions from groundwater. The resin has binding sites not only on the surface but throughout the volume of the resin particle, resulting in large capacity.

This report documents a study that was conducted at Lawrence Livermore National Laboratory's Site 300 to evaluate the ability of an ion exchange unit to remove nitrate and perchlorate from groundwater.

This report describes laboratory and field flow-through experiments that were conducted to compare the performance of commercially available synthetic anion exchange resins with a new bifunctional resin developed by the Oak Ridge National Laboratory and the University of Tennessee.

Demonstration of a Fluidized Bed Bioreactor for the Treatment of Perchlorate at Low Concentrations in Groundwater
T.S. Webster and P. Togna. ESTCP Project ER-0543, 255 pp, 2009

This article discusses the capability of a microbial culture to degrade perchlorate in ion exchange regenerant solutions with high salinity and ammonium levels. [The link to this article has been provided with the permission of the Royal Society of Chemistry].

A field demonstration was undertaken to investigate the performance of a passive emulsified oil biobarrier (EOS 550LS plus CoBupH, a slow-release buffering agent) to remediate commingled perchlorate, RDX, and HMX in the naturally acidic groundwater at the Naval Surface Warfare Center, Dahlgren (Virginia). Additional information: ESTCP Cost and Performance Report

A detailed field pilot test was conducted to evaluate the use of an emulsified oil biobarrier to enhance the in situ anaerobic biodegradation of perchlorate and chlorinated solvents in groundwater.

Use Of a Unique Biobarrier to Remediate Nitrate and Perchlorate in Groundwater
Strietelmeier, B.A. | 2001 International Containment and Remediation Conference, 10-13 June, Orlando, FL, 26 slides, 2001

This presentation describes work conducted at Los Alamos National Laboratory using a biobarrier to destroy nitrate in contaminated ground water and to investigate the potential for perchlorate reduction using the same technique.

This report describes efforts carried out by the University of Iowa to investigate the uptake and fate of perchlorate in poplar trees and to assess the transformation of perchlorate by microorganisms.

This report describes part of a laboratory phytoremediation project conducted at the University of Georgia to investigate the use of woody plants and herbs to remediate perchlorate-contaminated groundwater.

This report describes studies conducted at the University of Georgia with funding provided by the Wright Patterson AFB. The data collected by these studies indicates that selected woody, edible, and aquatic plants and microbial mats can be used to remediate environments contaminated with perchlorate.

This report describes a project to demonstrate the decomposition of perchlorate in ion exchange regenerant solutions by means of hydrothermal and thermal processes.